I recently went on a 12 day road trip across the Southeast in my T@G that included stays in Oklahoma, Arkansas, Tennessee, North Carolina, South Carolina and Florida. (Posts on those adventures to come.) Here are some of my improvements and things that worked well, as well as the issues I had and things I plan to work on.

As a whole this trip with a dog was much better than last years. Although she loves to go she didn’t always sleep or eat well last year. Having a familiar space to be in seemed to help that this time. She learned she could be lazy and lay on the bed and still reach her food dish. WithAirbnb and hotels I could not leave her in strange places without her crying and disturbing people in the area, but I could leave her in the camper with no problems. This allowed me to go to more places and she got more sleep and was in a better mood. 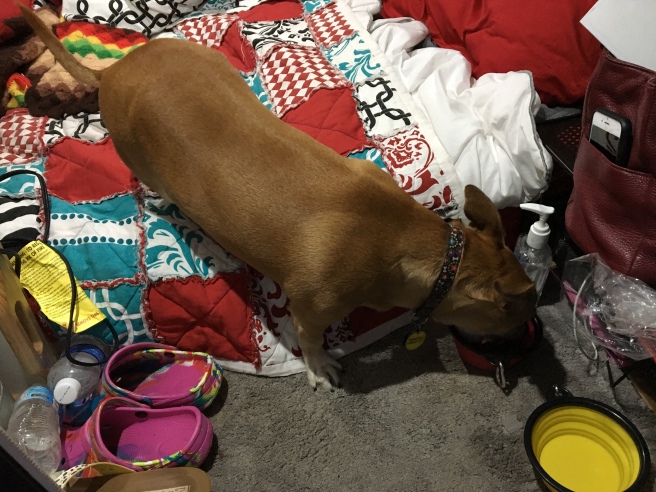 The crockpot lunch was definitely one of the best things I bought. I was able to plug it in using an inverter to warm up food while I was driving. 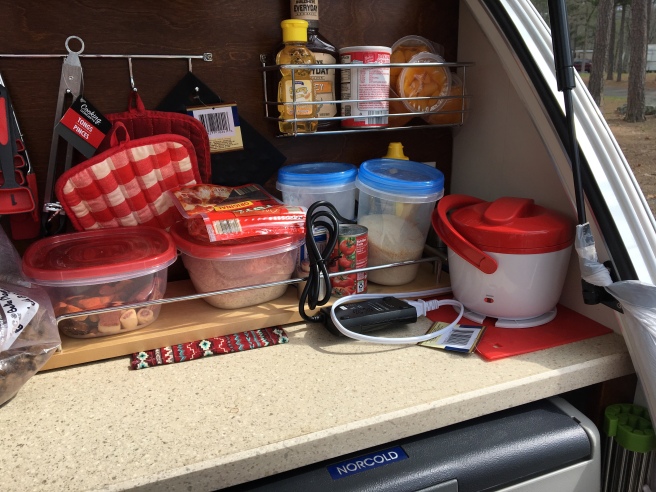 I could also use it the nights before we needed to leave early the next morning. That way I could get the kitchen packed up and ready to go and still have a hot meal. I cooked soup, stew, chili and baked beans in it and they all turned out well. 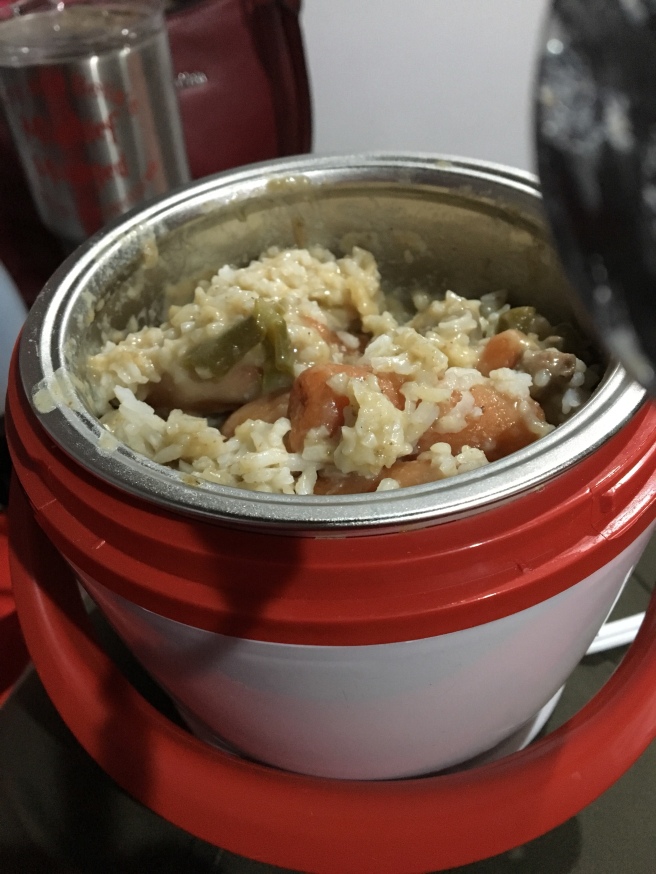 Setting up the camper to be able to get in and rest worked well for traveling days. It was nice to have a place to relax and put my feet up for a while. The only issue I had was bugs. The weather was perfect to get a breeze but the whole trip I found myself running out flies, bees and a couple of times wasps. My next modification is the make a screen for the door. I already have an idea based on Velcro screens and have ordered the materials to make it. 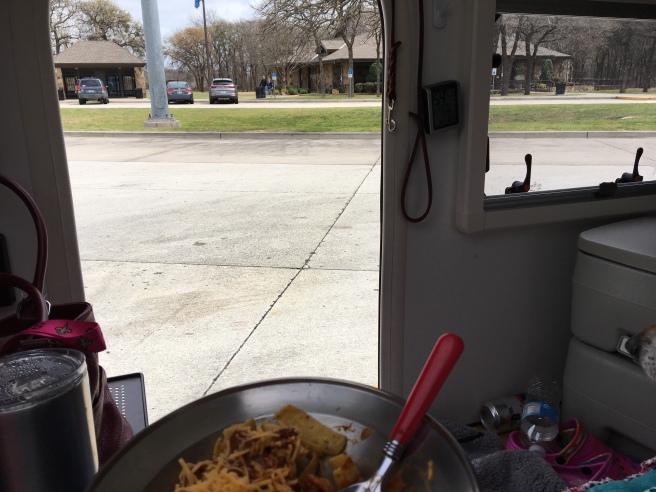 I am still loving the breakfast center and planned ahead to make flatbread pizza. The only issue with it is that it pulls too much power to work on an inverter so my nights of boondocking I couldn’t use it for coffee. If I continue to camping off grid I will have to consider a stovetop coffee maker. 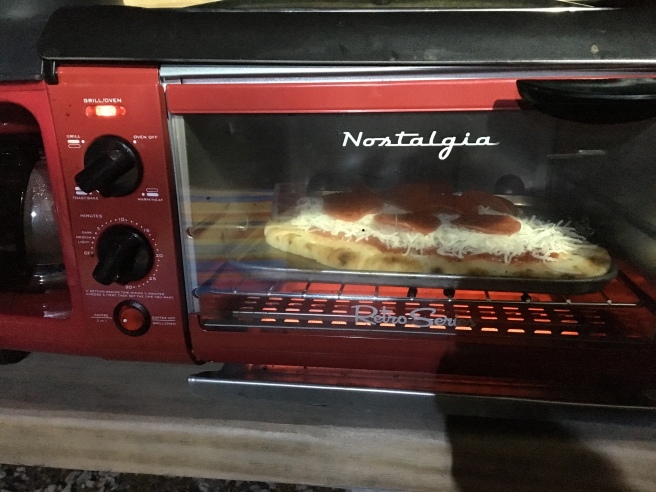 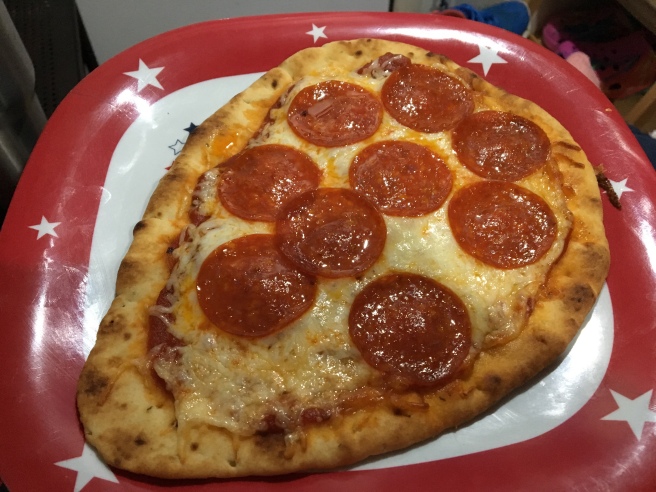 A last minute idea I had that worked well, was using small plastic containers like you get with take out. I knew I needed pizza sauce and wanted ranch dressing for carrots and pickles for hamburgers but I needed to conserve space and weight. These work great and allowed me to take just what I needed. 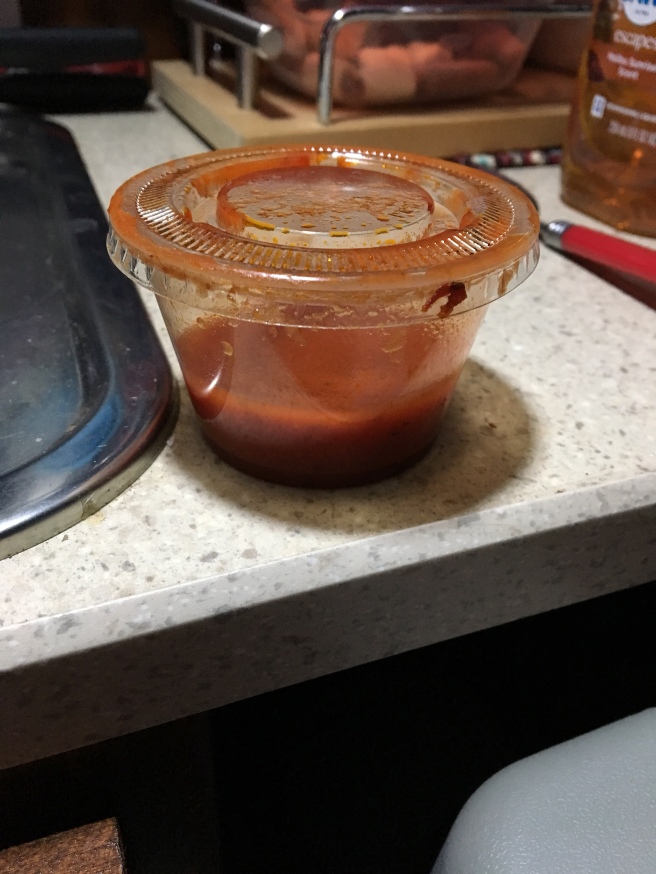 The egg timer I bought worked great too. When I was in areas with no cell coverage I just turned my phone off and put it away. With this I wasn’t having to hunt it out to time food. 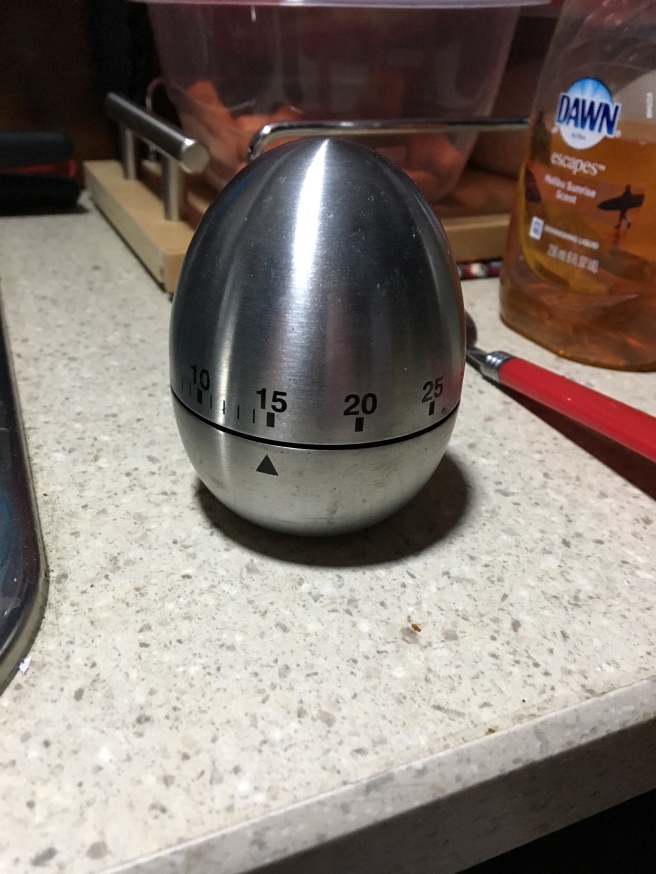 Although I didn’t take the time I needed to do the math on an inverter, the one I bought did run the electric blanket. It would not run the heater but the night we boondocked in the Great Smokey Mountains the low was in the upper 40’s and the electric blanket along with the quilt was enough to stay warm. It did not run the battery down much either. 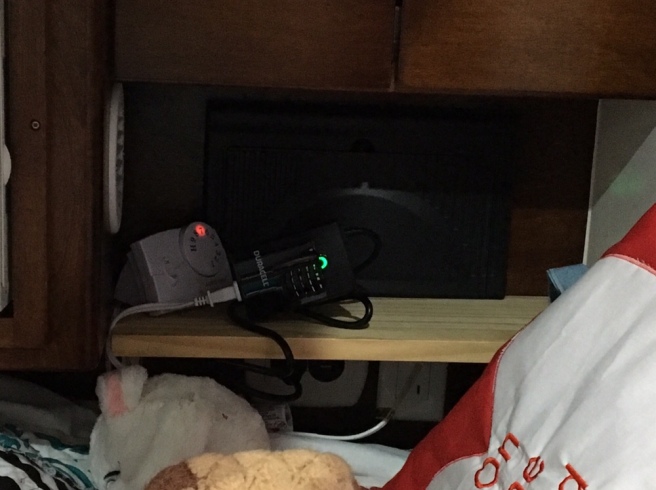 For nights with power I made a slight change that made things easier when it came to power. I had learned that the cord on my electric kettle was too short and I would need an extension cord. I decided to just run it under the mattress and keep it out to use for everything instead of having to climb over stuff on the bed (mainly Bella) to reach the plugs at the foot of the bed. I even started plugging my phone and Kindle into it instead of using the USB plugs at the end of the bed. 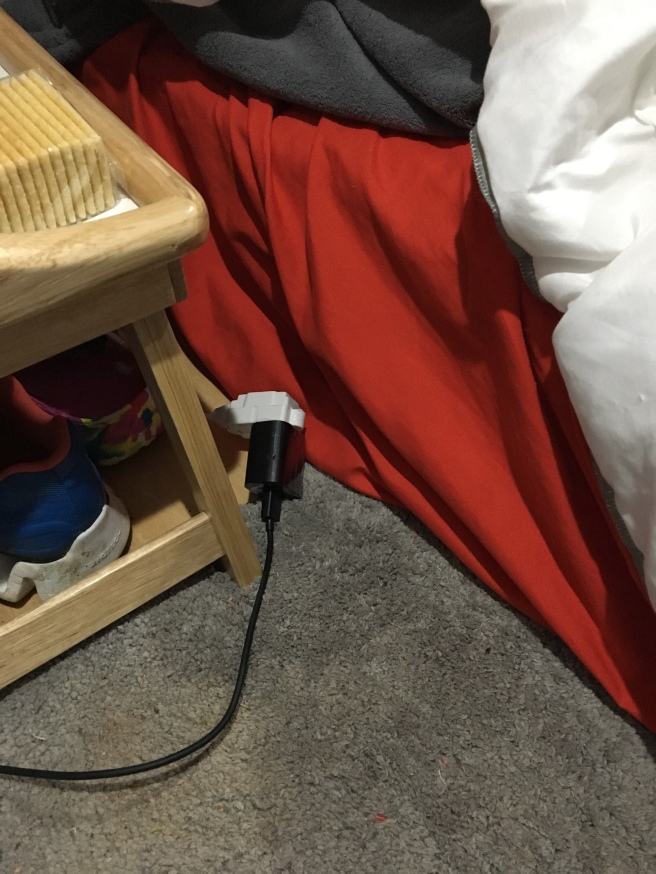 I finally had a chance to use my roll up dish drainer. The nights with no water hookup I just wiped off dishes and then washed them when I got somewhere with water. It worked great to have a place for everything to dry. 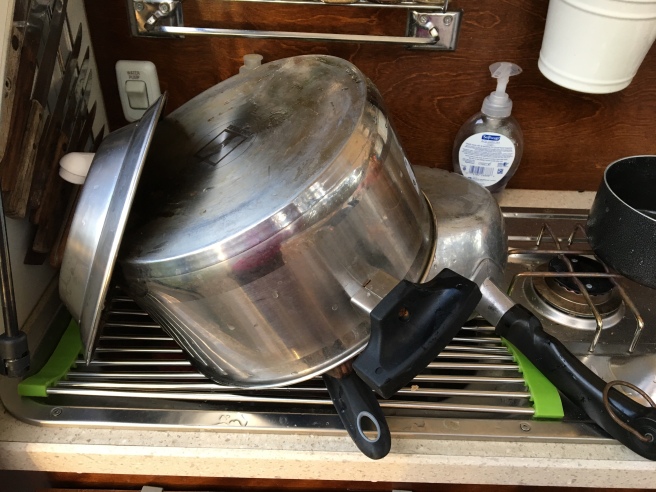 For this trip I decided to get a wireless hotspot for internet. I have tried in the past to use my phone as a hotspot for my tablet but the connection wasn’t great. I decided to go with AT&T Go so I can just buy data by the month when I need it. 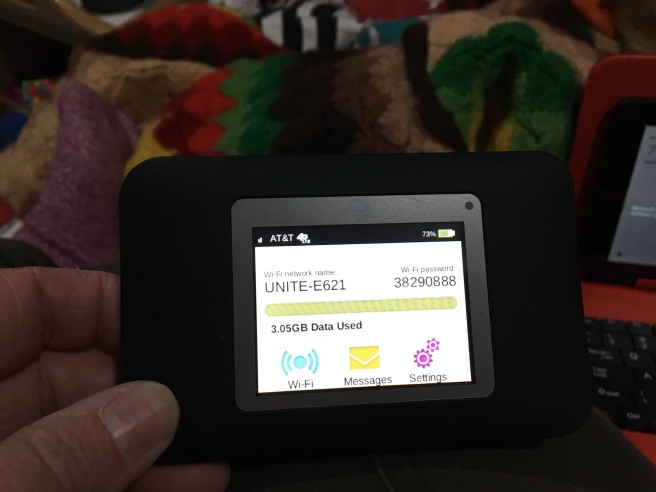 I packed my Firestick to try to use but the TV did not have a connection for it. I discovered though that it was easier to watch TV on my tablet. I would only watch maybe one thirty minute show at a time and it would have been a hassle to take down all the clothes storage to see the TV for that short period of time. 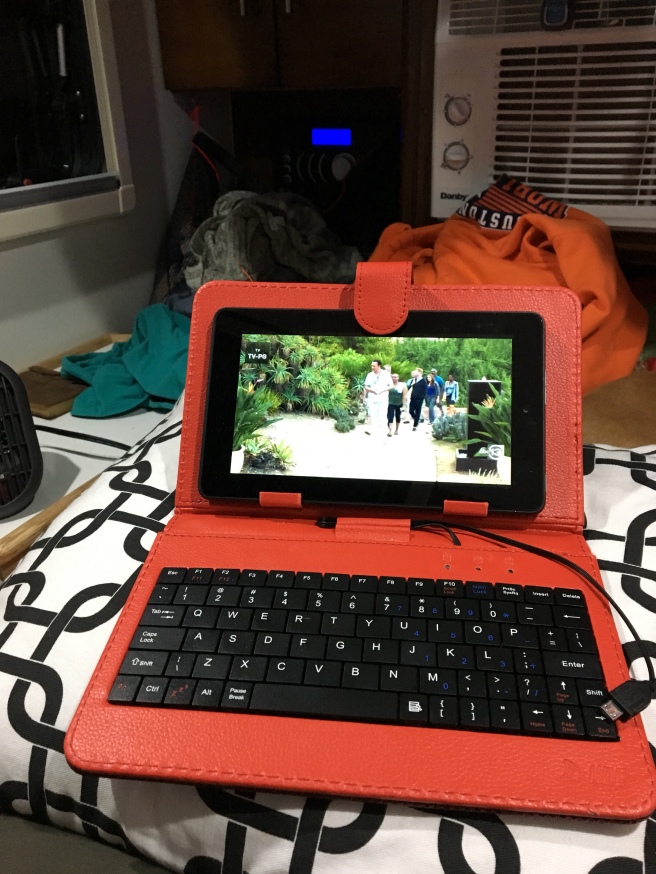 Having the port a potty inside worked really well on this trip. Although I did still try to use it sparingly, it did come in handy a few times on country roads and in The Smokies where the restrooms did not have parking for trailers. It also worked well on the one night stays where I was not able to get a spot by the restroom and it was cold.

I was kind of concerned abouthaving it inside with Bella that she might try to mark it. It seems to be made well and chemical worked well because she was never interested in it. 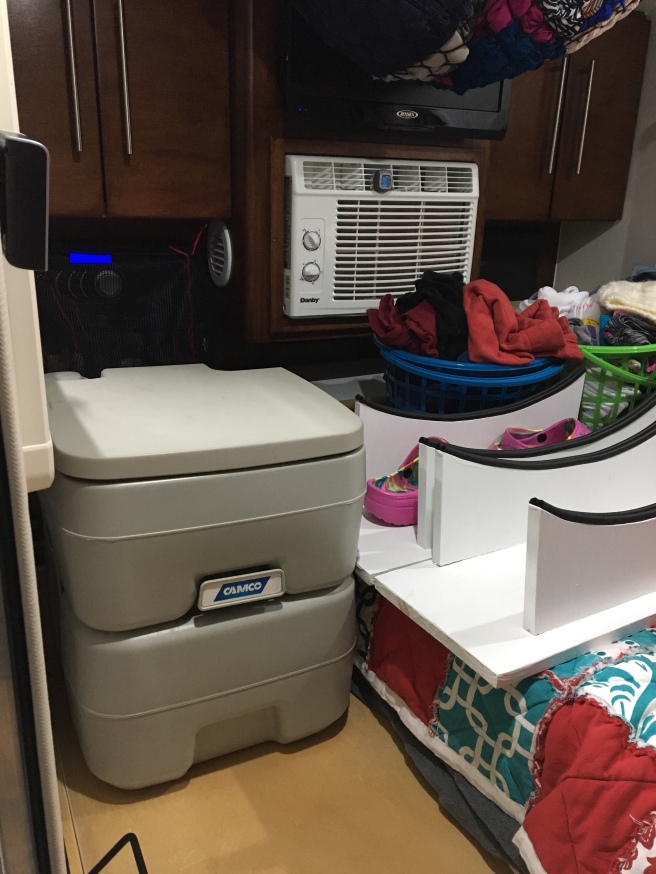 I will offer one warning if you plan to take a port a potty into the mountains that luckily I was warned about. Before you head into higher elevations, if it is close to empty and possible, open the valve slightly to let it vent. If this is not possible, try to vent it at regular intervals as you increase elevation. In either case, the first time you use it in higher elevations open the valve with the lid held down or you will have a massive mess. I was warned that the pressure release would cause it to “blow” but I did not expect how bad it would be. I did open it with the lid closed before using it the first time, but the pressure release did lift the lid. Also, even if you open it with the lid closed before using it you can have a mess because the pressure forces water from the fresh water tank out into the bowl, so when you vent it, it will spray this water. It is made well so that there was no mess in the camper but the Clorox wipes I packed were much appreciated in cleaning off the seat an lid.

The Clorox wipes and disposable rubber gloves also worked well when I needed to empty the port a potty. By using it only when necessary I only had to empty it once and did it at a dump station. It was really easy and I just wiped the whole thing down with Clorox wipes and threw the gloves away when I was done. I think the dump station was actually easier than emptying it in the toilet at home because I did not have to lift and balance the tank.

I was very happy with my cover for my shower. I only set up the full shower at one stop but the cover allowed me to use the port a potty when it was raining on a couple stops. A happy accident was that my idea of using plastic liners to hold the heat in also worked with the heat from the sun. I took an outdoor shower at my coldest temperature yet, 42, but it was ok. It was still warm from the sun and the hot water kept it warm. 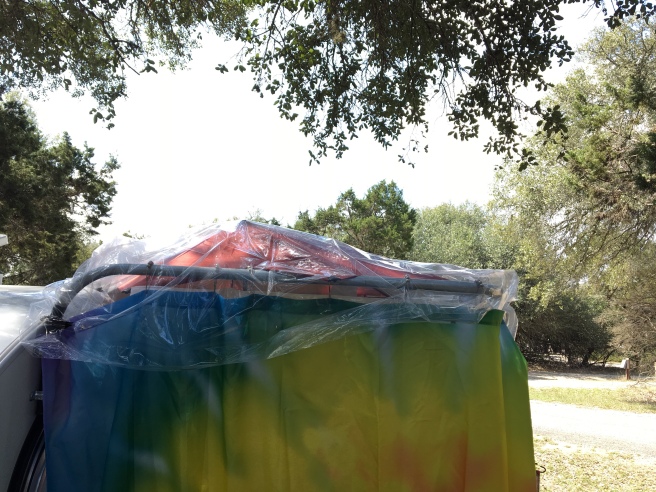 I made a change to my front window before I left that I used for the first time. If you have a T@G you know that the knobs to hold the front window open will strip out easily and not work to hold it up. I decided to drill holes in the rod and use pins to hold it open. 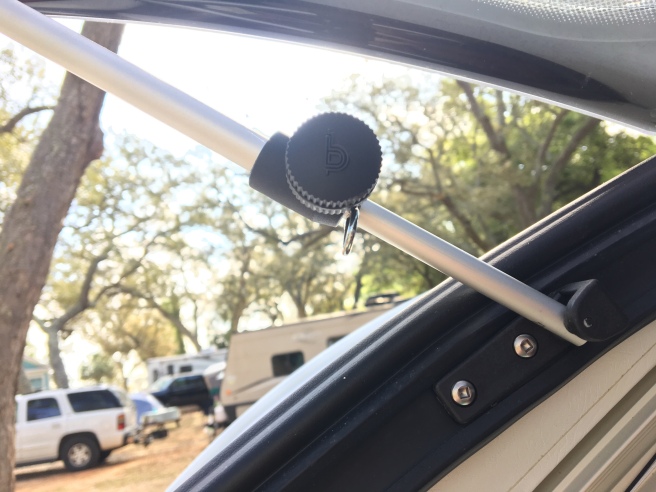 If you decide to do this, be warned that the bar is a solid piece of metal, not hollow tubing. So be prepared for a slow process. 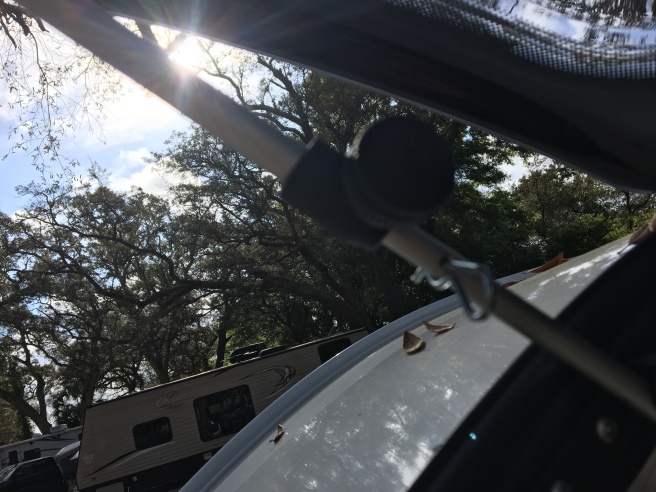 The pins worked well but I found that the nights I didn’t put up the shower rod I could just rest the window on it. 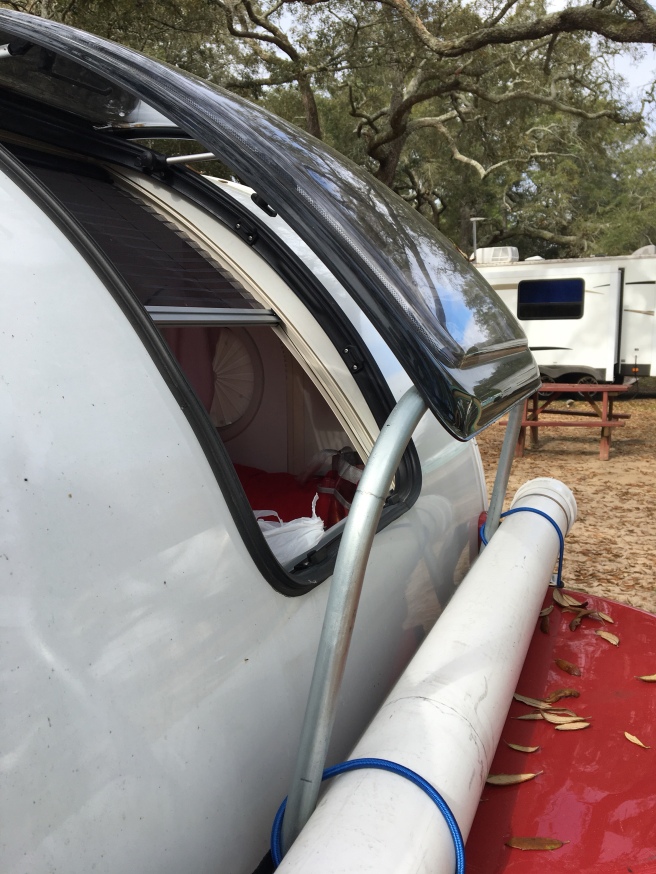 I had to do something about the smell in the camper. Even though Bella didn’t stink when she was in it, there was a distinct wet dog smell in it after being closed up. Also, I learned on my last trip that having dirty laundry closed up in tight quarters wasn’t the most pleasant smell. I tried Fabreeze car clips because they are made for small spaces and I didn’t want anything too strong or overpowering. I clipped it to the AC since it’s designed for that but it works fine without air flowing. 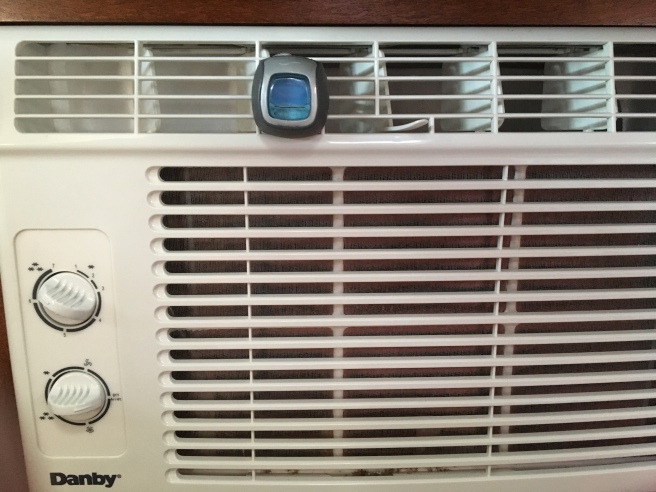 I will never camp again without wet wipes. They were great for the nights I stayed off grid but just generally good for wiping Bella’s feet off and wiping my hands after setting up instead of having to open the kitchen and get to the sink.

*Warning – TMI* I did learn on the nights of boondocking that it is possible to get clean without taking a shower and when you are not somewhere with a million percent humidity you don’t stink. I was able to heat up water on the stove to wash my face and used wet wipes to wash everything else. I got mine for around $2 at Aldi. 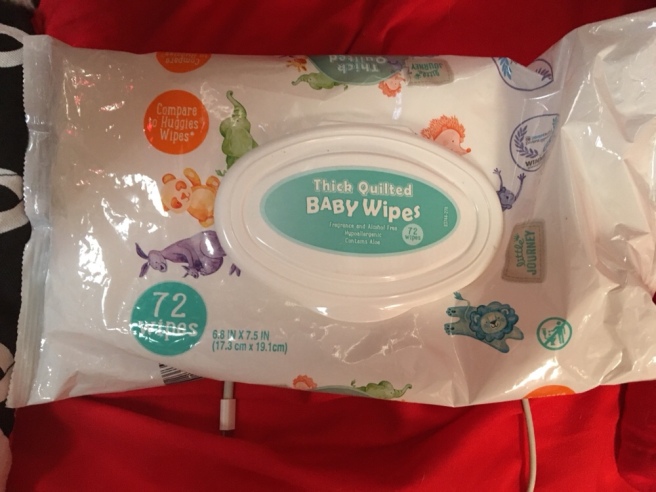 The only big issue I had was with my PVC storage under the camper. I met someone on the narrow, curvy road in The Great Smokey Mountain National Park that was driving too fast, down the middle of the road and in order to avoid a head on collision, I had to drop my right tires off the pavement. It was a very large drop and when I did it, I heard the crash when the cap and metal band holding it both shattered. This is what it looked like after dragging from the other band till I could stop and cut it. I was able to save the water hoses inside at least. 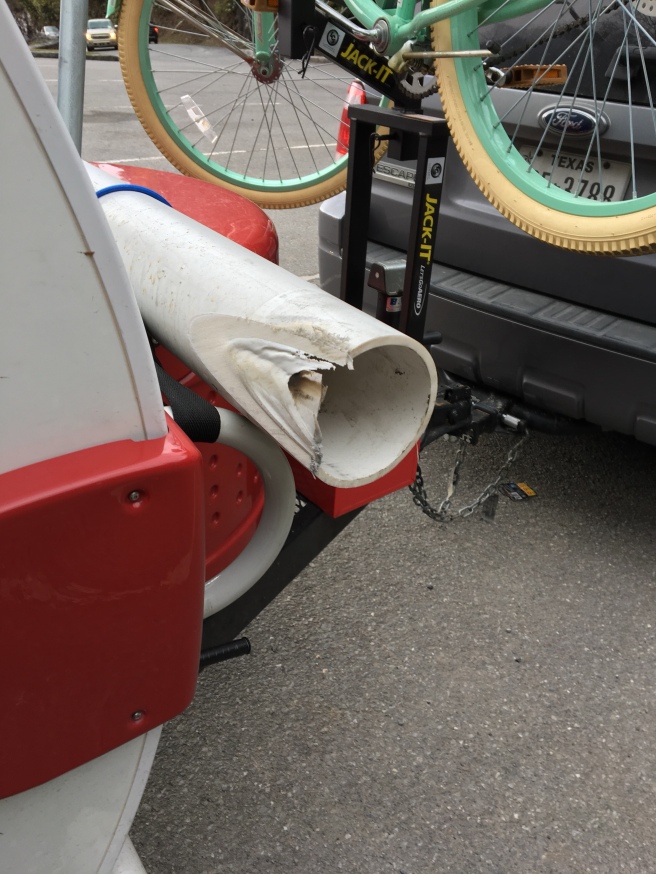 All in all I’m very happy with how the T@G performed and feel like I don’t have many changes left to make it function it’s best. Next steps will be solar and getting ready for more off grid adventures.