We recently stayed for four days in the Black Hills area of South Dakota and while I thought that would allow plenty of time to see and explore, alas, as always, it wasn’t nearly enough.  Fortunately, the beginning of our time in the state was not an indicator of the whole stay. We headed into the state trying to outrun another midwestern storm and I had had enough of them in Kansas.  I’ve heard that on the plains you can see the storms coming for miles and they block out the sun, but until you experience yourself, you can’t really understand the magnitude of these storms.  This is coming from someone who has been through multiple hurricanes.  I didn’t dare stop for pictures with the good camera because I was trying to get north of it as soon as possible,  but I got one shot from my cell phone that gives you a pretty good idea.

In South Dakota we stayed at the Bismarck Lake campground that is technically part of the Black Hills National Forrest, but you enter it through Custer State Park.  It is a beautiful park right on the lake with beautiful views.  The sites offer a lot of space and privacy.  My only issue was that we got there right at dark so I got to back in, up hill, in the dark, which was a new challenge.  There was of course someone staying in the campground who helped me make sure I did not hit anything.

The park is full of wild life that are clearly used to people.  The chipmunks will come right up into your site with you sitting right there.  One actually came and drank out of Bella’s water bowl with us maybe three feet away.  Bella was not pleased and if she had not been confined to a leash I’m sure she would have gotten her a chipmunk before the trip was over.

There were plenty of trails and paths in the park to walk with beautiful views.  Bella had the best time exploring the park.  She got a little too excited by the water and almost ended up in the lake.  I know she can swim but she does not like it and I would have had to give her a bath.

Of course, no trip to the Black Hills would be complete without seeing Mount Rushmore.  My only issue with it was that dogs were confined to the parking lot, so that limited the time I spent.  There are actually wonderful views of it from the road leading to the monument as well, but there aren’t many places to pull over for pictures.  The actual monument is free but the parking is $10 per car.  I debated on paying that but ultimately went ahead since I don’t know when I would be back.

The campground is closest to Custer South Dakota, which is a great little town.  They were very pet friendly and we visited the Mount Rushmore Brewing Company and The Frontier Grill, both of which allowed dogs on their patio.  I would highly recommend both.  The town as a whole has very much of an old west, frontier town feel, right down to the log cabin façade of the Family Dollar store.

There are many things to see and do close to Custer.  One that I chose not to see, but is in the picture above, was Crazy Horse Mountain.  It is a mountain that is currently being carved into the head of a Native American as a tribute.  There is a visitor center that tells you more about it, but it was $35 per vehicle and while I applaud the effort and think it’s a cool idea, I just could not justify that much money for that.

One of the biggest attractions in the area is of course the Buffalo.  I had my first up close encounter driving through the Jewel Cave Park near by, when one was using the campground sign as a scratching post.  One of the best afternoons we had was on the Wildlife Loop of Custer State Park where we had the very up close and personal Buffalo experience.  I was afraid that the buffalo were going to be like the bears in the Smokey Mountains and Bella was going to bark at them nonstop.  The evening we got in we passed some going to the campground and she did sound the “danger” alarm.  But after a couple times she gave up and resigned herself to staying hidden in the back seat.  I’m pretty sure her thinking was “well, I tried to warn you there was danger, if you get eaten it’s your fault.”

I was very happy Bell had given up on barking at them when we had one come right at us, rub across the front of the Pathfinder and pass between me and the car stopped in the other lane.  Luckily I have no damage from it.  I do not have pictures of it happening because, well, I was kind of panicking and watching for escape routes, while making sure Bella did not antagonize it.  I did learn a very important lesson from someone else’s mistake.  Don’t honk at the buffalo!  They do not like it and they are smart and know where it comes from.  As you can see from the pictures below, a motorhome made the mistake of honking and the buffalo went right up and rammed it.  The guy was not smart though and continued to honk and while the cars behind him took the opportunity to escape, another buffalo on the road headed to the motorhome as well.  I assume it was to help the one ramming it, but I got out of there as quickly as possible when he continued to make it angry.

There were signs all over the park about elk but we never saw any.  While most federal parks do not allow dogs on the trails, Custer State Park had plenty of dog friendly trails with beautiful views. We never ran into any buffalo or elk, but there were lots of prairie dogs she wanted to chase.

After 4 days we still had many things I would have liked to done.  There were many caves I would have liked to visit as well as many museums.  I will definitely have to plan a future trip here to check out those things.  On our way out of Custer I did get one last shot of the T@G with the beautiful South Dakota sky.

On our way out of South Dakota we had one last adventure.  I had checked out the Bring Fido app, which I highly recommend if you travel with a dog, and found that the Reptile Gardens in Rapid City allowed dogs.  Since it was on our way I decided we had to go.  We were not disappointed.  Just the garden itself is worth the stop.

We got there just in time to see the bird show that features a number of birds of prey, as well as one treat at the end, who takes your donation money.  Bella wasn’t sure at first what was going on but she watched them intently when they walked around the audience with them.  The only one she showed any signs of aggression with was the large owl, but it was eying her kind of suspiciously, so I understood.

Even though their name is reptile gardens they have a number of other attractions to see as well, like Prairie dogs and many birds including a bald eagle and a Macaw.  Bella did not care for the Macaw but to be fair it started fussing at her as soon as we walked into the greenhouse where it was housed.

The biggest attraction, in more than one way, was the giant tortoises.  Bella did not show any aggression but she was completely fascinated with them.  She wanted to get closer but I kept her at a distance in case they decided they did not want to be her friend.  You know, since they are like three times her size. 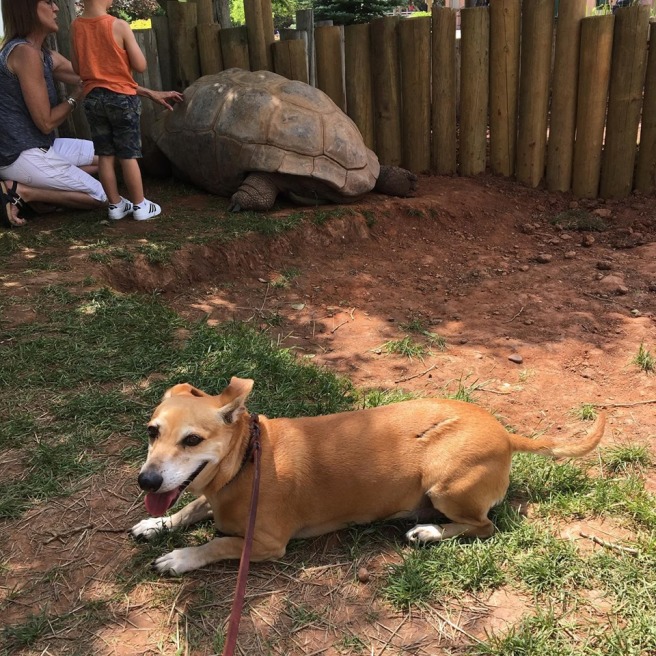 I’m pretty sure the progression of the pictures on the left below were her spotting it and then turning around like “mom, do you see this?!”

She sat pretty and posed for tons of pictures for me including in the rain forest and with the iguana. The Reptile Gardens definitely ended our stay in South Dakota on a high note.  Then it was on to the next state.