Yes, I know, if you are regular reader of this blog you are thinking “new ride?”  I know, I said I didn’t need a new vehicle after my Spring road trip, but new car fever hit me hard. Also, the Escape had a chance for a new home and purpose of carrying my new niece. Knowing it whether or not it would have a good home was a big issue I had with getting rid of the Escape.  I couldn’t stand the thought of working so hard to take care of it for 11 years and it ending up going to someone who would not appreciate it and give it the same care and maintenance.  So when my sister said they would be interested in it I took the leap and started seriously looking at new vehicles.  In June I bought a new 2017 Nissan Pathfinder still on the lot, for a great price.  It has all the bells, whistles and fancy stuff I said I never needed in a vehicle and already can’t live without.

I took a road trip without the camper to test out how it did on the road and learn how to use everything, like the adaptive cruise control.  Then, this past weekend I did my first trip pulling the camper.  I was already loving the Pathfinder, but this trip just reinforced that I made the right choice.  I can fit more in the back with only the 3rd row seats down than I could in the Escape.  Which of course means, I can buy more on my next long trip.

One issue I had when looking at new vehicles is that no one seems to offer the feature where you only open the back glass anymore.  I was concerned because in the Escape the hatch could not open with the camper hooked up so that glass was how I could get things in and out on overnight trips where I wasn’t unhitching.  It’s not an issue on the Pathfinder because the hatch actually opens all the way with the camper hooked up.

Some of the best things with the Pathfinder are the tech options I didn’t know I needed.  Having navigation that does not drain my battery and data is going to be great for road trips as well as the Satellite radio.  It also comes with 3 years SiriusXM Traffic and weather which was useful on this trip to see where the rain was while I was driving, without having to look it up on my phone.

On my first trip with the Teardrop, I returned to the Thousand Trails Lake Medina Campground in Lake Hills Texas, right outside of San Antonio.  My plan was to work on getting my cave pass completed that I got on my trip to Cave Without A Name.  By getting to the campground earlier in the day I was able to get a site with a nice view of the water.

I went minimal with my setup for this trip since it was a short one and it was hot. The less to setup in the heat, the less the take down.  I did make use of my canopy, but put it over the kitchen this time since rain was forecasted for the weekend.

I added a couple other new items for this trip that made camping during the summer more bearable.  The first was an ice maker.  I have seen a lot of Teardroppers with them but I had not invested the money because most of camping so far has been Fall and Spring when it wasn’t a necessity.  It was completely wortth the money.  New ice cubes every 8 minutes and I also realized I can use the ice storage area to hold small containers of ice cream, because you know ice cream is a necessity for camping during the summer.

Since I have the icemaker I decided to save space in the fridge and use instant drink mixes.  Not as good as fresh made tea, but easier.

I also went ahead and invested in a good TV antennae with a booster.  I tried several places, but inside the window worked best and the cable could be run the short distance to the plug on the outside. It didn’t get a ton a channels but better the nothing I had been getting.

During last trip Bella jumped onto the foot of my lounge chair and we discovered that its seams were not rated for that much weight coming down hard on them, concentrated in tiny, boney paws……..and she went through it.  I repaired the chair but she decided that her camping bed I bought her a year ago is now a good option.

In this area we saw a lot more deer than we did last time.  They came right up to the site.

They were in large groups, making themselves at home.

This one hung behind and wanted to make friends.  It came all the way up, but as soon as a hoof touched our mat, Bella got territorial and ran it off.  Overall, she did much better with the deer this time though.  Until they got really close, she wasn’t concerned with them.

Saturday was dedicated to the caves.  It worked out well since it rained most of the day.  I only did the Natural Bridge Caverns but I did both cave tours.  If you have not been there and you are like me and sign up for things all enthusiastically, without reading the details, let me give you the cliff notes (pun intended).  The Cave Without A Name was a leisurely walk down a few flights of stairs, but mostly ramps, with a slight incline.  Natural Bridge Caverns on the other hand is 185 ft straight down, which is around 18 stories.  By straight down, I mean STRAIGHT down.  It is a serious of steps and ramps with inclines up to 35 degrees.  The going down is not the issue of course, it’s getting back up.  I did not read all of this carefully before I signed up for both caves, which meant going down…….and back up 18 stories twice.

I don’t say all this to discourage you from going because it is an amazing experience.  I just want to provide a proper warning for people who may want to visit and also give a disclaimer about why my pictures are not as good in these caves. It’s hard to get good pictures holding onto the railing for dear life going down, and the using them to pull you back up.  I tried to stop and take as many as I could, but it was also a very full tour group and others coming up behind us, so time was limited.

The first tour I did was the Hidden Passages tour.  It’s considered the more strenuous tour because it is mostly stairs going down and back up.

This picture give you an idea of how steep the stairs are.  The intent of the picture was to show all the way to the bottom but it was so far down that the flash did not reflect back enough to actually capture the bottom.  The stairs continue down into what looks like a hole behind the rail in the middle of the picture.

This tour takes you down to a very large room at the bottom of the cave and then back up the same way you came.  There is also an exploration tour where you would repel down from this point and continue going through the narrow passages below.

This picture was taken at the bottom the first tour, when I only thought I looked tired and out of shape.

I have no picture coming out of the first tour because getting out without passing out was the goal. Also, without puking, which the guide said was a regular occurrence.  I paid for both tours up front, because it’s cheaper that way.  After the first tour I seriously contemplated skipping the second one, but I talked to the guide and he said the second one was the easier of the two and that I really did ok in the first one, despite how I felt about my performance. I had a 30 minute break so I decided to refuel and go for it.

The second tour I did was the Discovery Tour, which is the original cave tour.  It is a little easier because even though it is the same depth, the decline is broken up more with some flat areas in the path and it has more ramps than stairs.  It also enters and leaves through different openings so you don’t have to dread the walk back up the whole way down.

This tour went through more small passage ways than the Hidden Passages tour.  It challenged my claustrophobia for sure

This tour has more large rooms with large formations than the Hidden Passages tour as well.

This picture was at around one third of the climb out.  Notice the huge difference from the first picture.  I don’t have a picture from the top because I was focused on not passing out.

After surviving both tours I treated myself for dinner at the campground with a bacon cheeseburger and potato wedges. 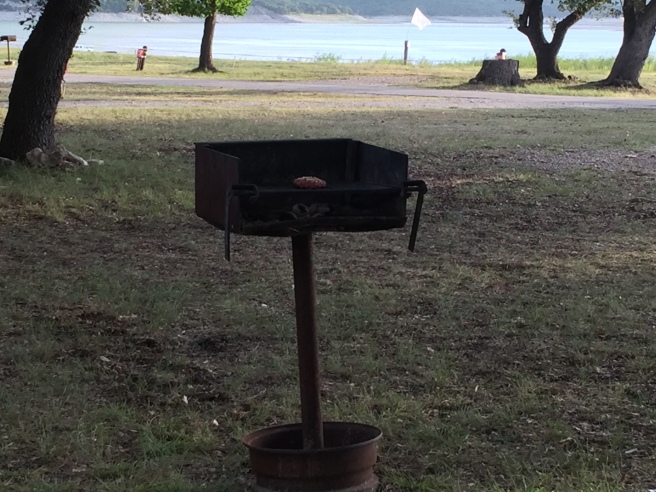 Over all it was a good weekend but summer camping is kind of rough.  The only reason this weekend was bearable because the rain kept the temperatures down from what they should have been.  Here’s to hoping it cools off soon so we can get back to more adventures.