It’s a winter wonderland in the South today! Yes, you read that right, winter has finally arrived in Houston and it even brought snow. It’s even more amazing since it was 80 degrees Monday and I had the AC in my house running. Even more shocking, it wasn’t just a few snowflakes, it was enough to cover everything.

I was excited about this rare occurrence of winter in Houston for a few reasons. First, because it helps make it feel more like Christmas and has finally gotten me in the mood for the holidays. Second, it really gets me in the mood to do some traveling to colder, higher elevation places in the teardrop. Lastly it has made me happy because I have been able to enjoy it, which is huge because I had not been able to tolerate cold weather the last few years. Being able to enjoy it here makes going to some places more feasible than I would have thought last year.

Bella had not shared this enthusiasm. As soon as it started getting cold Tuesday night she was not happy. When I left after lunch Wednesday she got in her bed by the back door (she has two, yes she’s spoiled) and grunted at me till I tucked her in. She has been in energy conservation mode ever since. 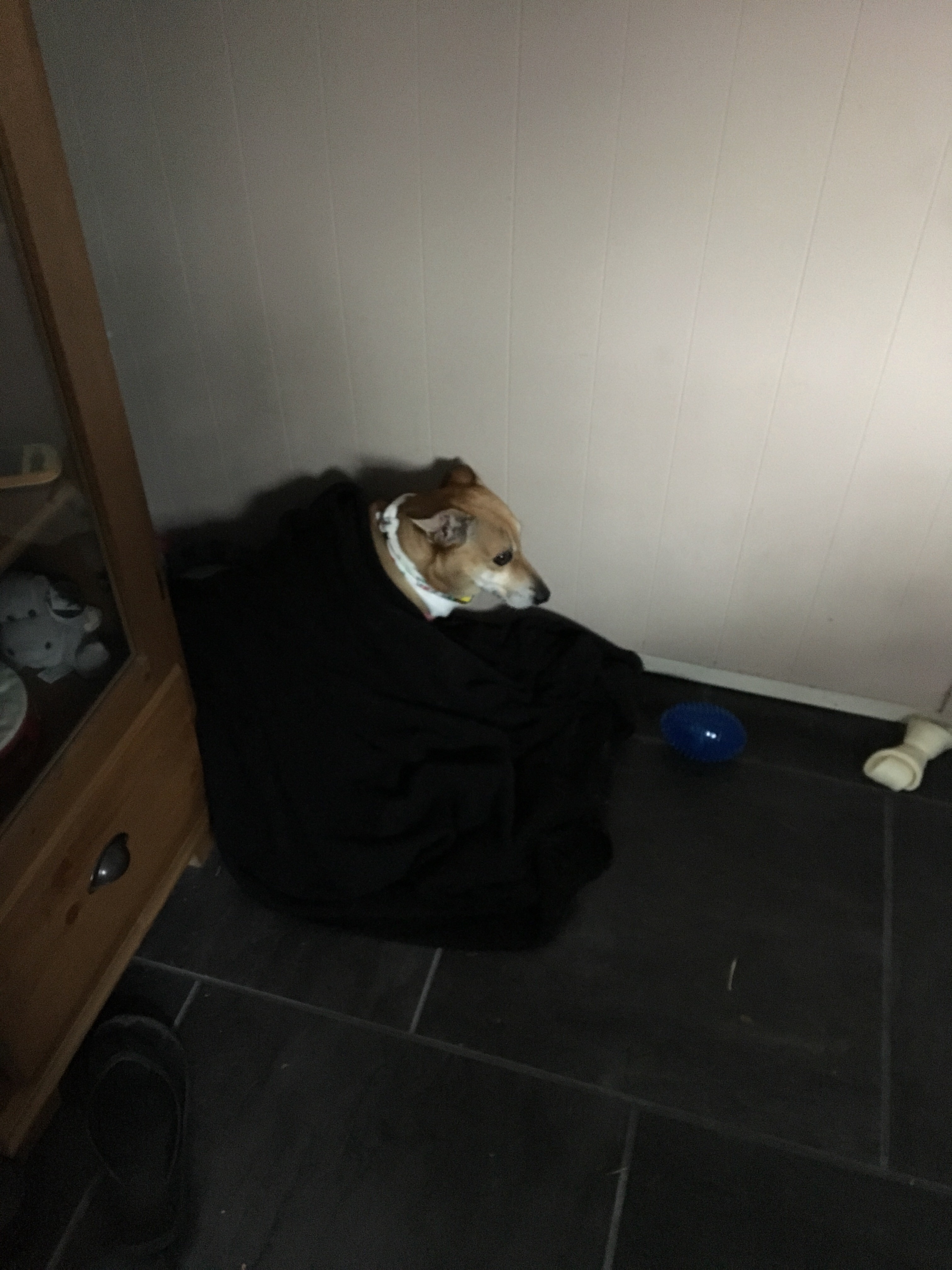 I already knew she was not fond of cold weather. She made that clear last year, but I kept her in sweaters and fleece vests and she was ok. However we really did not have a “winter” last year. We had one day where it never got above freezing and it t-shirt weather the rest of the season. She had appeared to enjoy it when it first started cooling off and was in the 60’s, wanting to lay in the sun and zooming all over the yard. When it got to be real winter weather it was a different story.

Her displeasure continued Wednesday morning when the rain started. She refused to go out as long as it was raining and made it known she thought I was crazy for doing anything. Clearly it was cuddle and sleep weather and I did not know it.

Even though she was grouchy we had to go out Thursday night because she is a therapy dog and we had a visit to Rice University for finals. In order to get her to go out I had to bundle her up in her Chewbacca coat and she rode the whole way there with her nose buried in my scarf. I guess she going to need a scarf of her own. 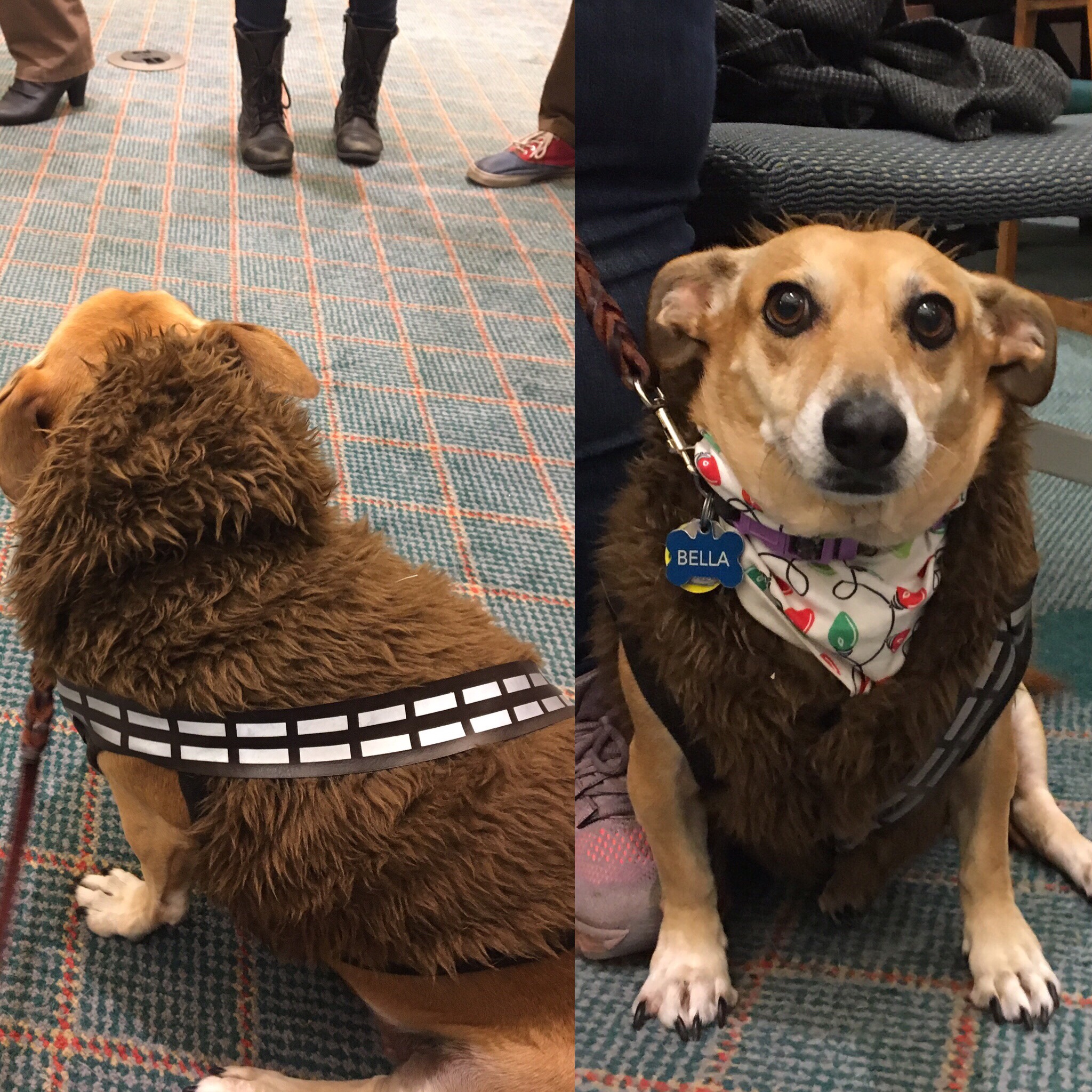 It started snowing here Thursday and was snowing when I took her out before bed. She was not pleased about any of it. I thought it was neat but had no expectations about getting more or enough to stick. I was very wrong. We woke up to the entire yard, house and neighborhood covered in snow. I took her and tried to get pictures of her in the snow. She went far enough out to use the bathroom and was done. She went back to the door, sat on the top step and grunted at me. I assume saying “her lady, I peed already , let me back inside where it’s warm!”

I was excited and wanted to make the must of it, knowing it wouldn’t last long. I let her back in and stayed out to take pictures around the neighborhood. When I came back in I found her on the couch, under a blanket with her “disapproving Corgi” look. She stayed there till I left for work and even then she didn’t move. 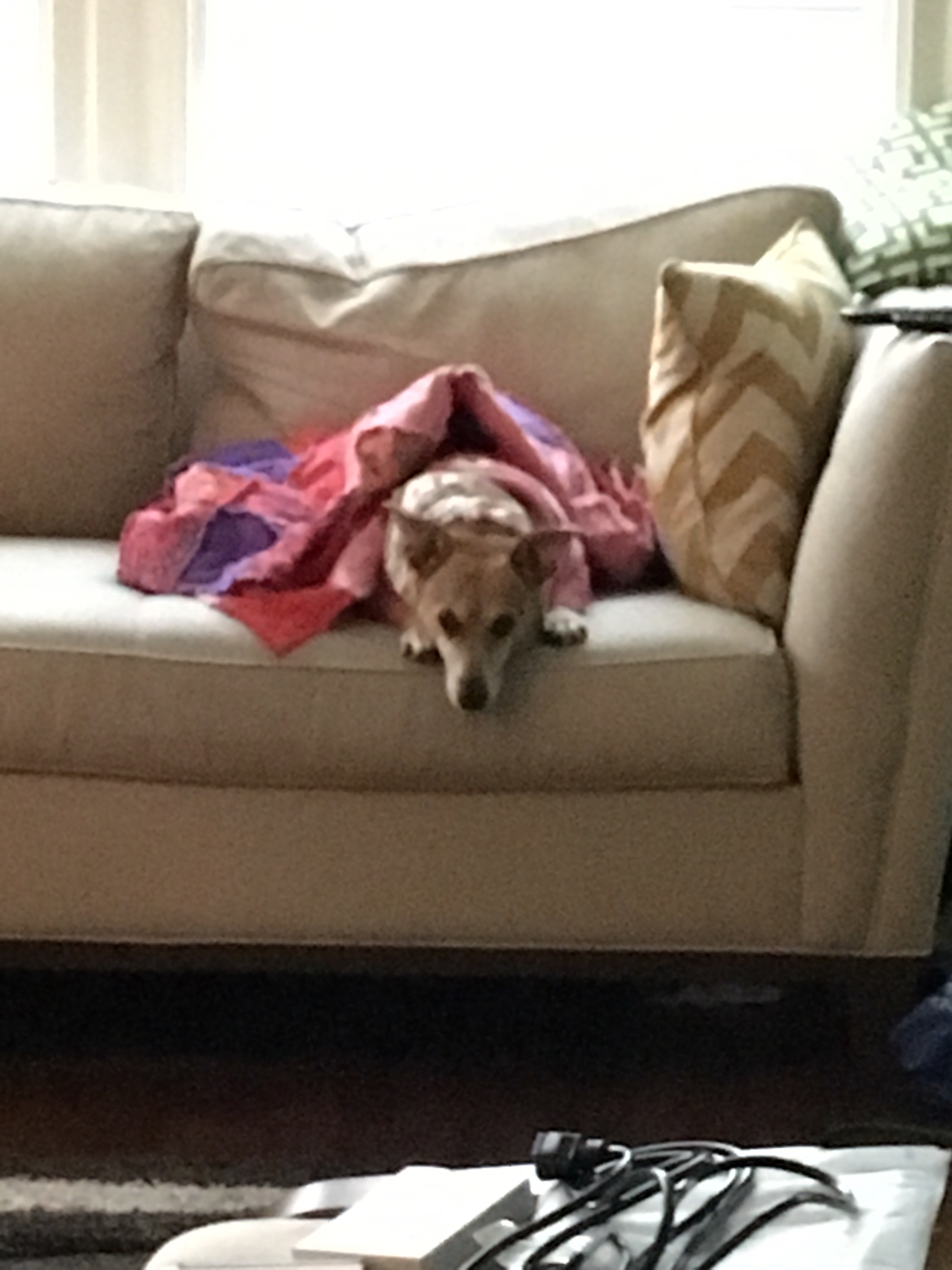 Although I know she is not a fan, she might have to learn to deal with winter. I will probably look into some better coats and things to keep her warm but there is a good chance we will be camping in some cooler weather areas in the teardrop. Since I am not in pain from the cold today it opens up a whole new world of possibilities I didn’t think possible just a year ago.

I’ve had some arthritis since I was in college, but with exercise and warm clothes I had still been able to tolerate winter weather and be somewhat active. I have been to Colorado and Canada in snow and other northern locations such as New York, Chicago and D.C. During the winter and was ok. However the last few years I started having extreme issues with cold weather. I had unbearable arthritis that was so bad I could hardly hold my toothbrush when it was cold and no matter how warm I got or how much I moved, every joint hurt to walk. In December of last year I went to Branson and ended up sick the whole trip with a migraine, fatigue and shortness if breath that was not reasonable for the temperature and elevation there. It could have been contributed to being out of shape but that was another issues. I had been working out for months and no matter how often I exercised or how hard I pushed myself I saw no improvement in my fitness level.

After many tests over 2 years that showed nothing, I had just concluded I was just getting older and had to accept this. Around Christmas 2016 and the first of the year 2017 I had multiple conversations with family and friends who suggested a meditation I was on could be to blame. Around the time I moved into my house I started on the Nuvaring at the suggestion of my doctor to try to prevent migraines that had become a regular occurrence that there was no explanation for. Her reasoning was that a steady stream of hormone in my system should balance me and hopefully prevent them. In retrospect the migraines were probably caused by stress.

In the beginning if 2017 I started looking up side effects of Nuvaring and found many stories of people who battled things like arthritis and chronic fatigue for years with no relief, but within a couple months of getting off of Nuvaring, all their symptoms went away. I decided to stop using it and have seen a dramatic difference in how I feel. I really saw a difference during my Grand Canyon and how much I was able to do and felt good the whole time.

Today’s snow day was just another example of the difference getting off the medicine has made. Yes, I am cold, but I am not in pain and was able to go out this morning and enjoy the snow. Now I just have to get Bella on board with winter.